Economic and Political Relationship between China and the United States

Home   /   Economic and Political Relationship between China and the United States

No country in the world can survive without forming strong relationships with other partners on the planet due to the influence of globalization. The two of the world’s most influential powers of China and the United States have strong economic and political relationships, which have mutual benefits to either of the giants despite having some tensions (Turner, 2011). Although the Asian giant has always been an outstanding state, in the past years, China has grown rapidly to able to compete with the United States, which has compelled the two countries to establish interdependence on many issues. According to Wu (2011), both countries are active partners concerning common ideologies, geopolitical interests, and global governance needs in the current era of shared security issues and increased economic interdependence. As such, these countries need to respect each other’s legitimate interests, failure to comply with which, as well as distrust and misinterpretation of intentions will break the mutual relations (Wu, 2011). Therefore, China and the United States enjoy and value their strong economic and political relationships; however, recently, the United States has a feeling of being overridden by the Chinese nation due to the associated imbalances of benefiting from the relationship and conflicting political interests.

The political ties between the two countries are not as solid as the economic ones despite being relatively healthy. In 2012, the top political classes of both nations supported the US-China relationship, which is considered the avenue for creating new possibilities for countries with different cultural, economic and political systems (deLeon & Jiemian, 2014). Besides, political leaders have been meeting constantly to encourage their relationship. However, most of the political relations are skewed towards bolstering the mutual economic ties only. The American administration has been meeting the rulers of China to discuss many things concerning their partnership, majorly on economic issues (deLeon & Jiemian, 2014). Regardless of the fact that the American has always felt the competitive potential of the Chinese development, they have never stopped supporting the peaceful rise of China to shape the world economy (Lawrence, 2013). Specifically, China is playing its economic role in a diligent and peaceful manner to accrue the stable American support.

On the other hand, there is fear of the political rise and military involvement of China from the US. Despite the fact that the Chinese and American governments are working closely, the US is experiencing some anxiety over the possibility of its mighty partner sparking conflicts that can result in hostility. For instance, Chinese expenditure on the military reinforcement has been increasing to provoke worries of the regional American allies (Mearsheimer, 2010). Richardson (2010) explains that from the 2010 annual report, the regional power in Asia is shifting towards China which has severe consequences for other countries and the United States, which is their ally, in particular. Historically, China has been known as a nation that uses force to realize political goals based on the costs, risks, and benefits (Richardson, 2010). Such a thing may explain why the American government is keenly working with China to ensure that only peace prevails during the period of economic ascension.

The Nature of the Economic Relationships

The growing economic relationships between the United States and China have been established over the years as the Chinese economy continued to grow at supersonic speed to achieve the global interest, the way the American one has been for many years. As such, the two countries have been compelled to form strong economic bonds that attain mutual benefits. Kamrany and Milanovic (2011) reiterate that China has implemented remarkable transformative improvements in the last decades at a speed and scale that has positively impacted its economic growth and ensured global influence in many issues. The Chinese new economic approach began in the 1980s, focusing on unique market economies and exports (Bendini, 2016). This approach turned out to be the most effective and beneficial for the Asian nation and the entire world, including the United States concerning international peace and trade affairs. As such, the country has attained a global status similar to that of the United States in the economic potential.

Further, the two are the forces that are outcompeting themselves on various industrial aspects, including the GDP and purchasing power parity (PPP). In 2014, the International Monetary Fund rated China as the first global economic power measured in PPP, producing more than 17% of the world’s produce, followed closely by the United States which had 16% (Kamrany & Milanovic, 2011). However, the United States outperforms the Asian nation when it comes to the volumes of the GDP. Bendini (2016) explains that although the per capita income of China increased steadily at an annual rate of 8-10%, its GDP tails that of the United States. As a result, China is struggling to bridge the gap between its GDP and the American one. According to Bendini (2016), China is expected to converge it in the next two decades, which, if achieved, will promote such attributable factors as the low fertility rates and the rapid economic growth. Therefore, the Chinese and American economic relationships reveal tremendous competitions to demonstrate financial powers in the entire world.

Benefits of the Economic Relationships

The US-American relationship has many advantages, which will make these countries remain at the top of the leading economies on the planet. According to the US-China Business Council (2016), the profit is mutual since it supports more than 2.6 million jobs across many American industries, including the Chinese companies on American soils. On the other hand, China receives employment opportunities from American foreign investments in their country. Similarly, as the Chinese middle class continues to increase, American companies will be the major beneficiaries since they will tap into the new and lucrative customer base, something that will further boost the economic growth and cut unemployment rates (US-China Business Council, 2016). Additionally, both countries benefit from the import-export trade. China is especially advantaged here as it is reaping most of the export profits. Bendini (2016) explains that although the US definitely wins from the trade ties with China, the Chinese exports are about four times more than the American ones.

Apart from that, the US sells high-value commodities, such as trucks and cars, semiconductors, and construction equipment, all of which support the creation of the great many new jobs. Both the American and Chinese export trade is expected to thrive more in the future years, which means that the two countries will continue enjoying the benefits of the economic relationship. For example, American firms exported financial and business services accounting for $6.7 billion and $7.1 billion in 2014 and 2015 respectively (US-China Business Council, 2016). Such a rise in export earning shows how the revenues are increasing as long as the relationship exists. The US-China Business Council (2016) explains that by 2030, it is expected the American exports to China will increase to the tune of more than $520 billion.

The present-day economic partnership is promoting the global economy in which the two players are successful. The White House (2015) explains that this relationship enhances sustainable development and inclusive growth, as well as ascertains stable financial systems. As such, the ties bring the economies of the two countries and their citizens numerous advantages through the generation of foreign revenue and jobs, which is a huge step towards the alleviation of poverty.

Concerning the trade relationships, China is the major beneficiary despite the two countries acquiring reputable financial results. As it has been aforementioned, the United States and China are the largest global economies that are able to effectively compete with the entire European Union. Nevertheless, the benefits of their relationship are skewed towards the Asian giant (Bendini, 2016).

The graph below (Figure 1) is an illustration of the level of the American importation and exportation relationships with China. There are massive imbalances between these two indicators for the American side, with the imports exceeding the exports. Such a state of affairs indicates that the United States over-relies on Chinese products and services far more than the Asian giant does on the American commodities.

Chinese exports to the United States from 2000 to 2014 nearly quintupled from $100-$467 billion, which makes the American country the largest export market for China (Bendini, 2016). However, China is not the largest importer of the United States produce because it comes in the third position. In 2014, it imported commodities from this country worth $124 billion (Bendini, 2016). The difference is huge, with China reaping almost four times more revenue than America. As such, the import-export trade relationship is unhealthy for the American economy because China is the primary beneficiary. 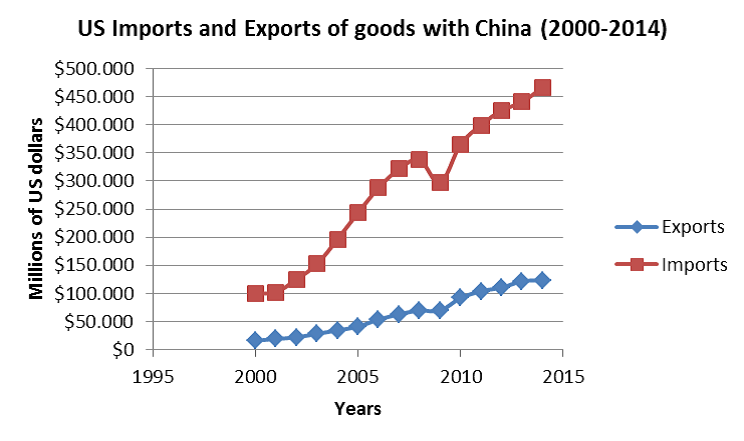 Reactions from the Imbalanced Relationships

Economic relations between the two global economic powers are turning sour due to the American fear of being outcompeted by China, which is growing at an alarming rate. First, the relationships had adverse impacts on the American manufacturing employment. Dollar (2016) reports that it is undisputable that the American manufacturing employment decreased sharply from 17 million in 2000 to 11 million in 2010 (Dollar, 2016). Such a drop is alarming for any nation and can create immense threat of being outdone as a world power. Some scholars and economists have explained that the sharp decline is attributed to the Chinese opening up and reforms that may account for a 25 percent decline in manufacturing jobs for Americans from 1991-2007, and a 40 percent loss after 2010 (Dollar, 2016).

In fact, trading with China has been associated with many negative issues for Americans, especially attributed to the loss of manufacturing jobs, reduction of semi-skilled workers’ wages, and the subsequent devastation of communities that rely on manufacturing jobs. Therefore, the economic relationship has been harming the US production industry while China has been reaping huge advantages from the American downfall.

The US-China relations are mutual with all the two powers obtaining remarkable benefits. The political relationship is healthy with both of the top political classes supporting the bilateral interaction to enhance various achievements concerning the international economy and peace. However, the US has worries concerning the possibility of China to use its resources to stir political instabilities. Regarding the economic relationships, the two countries are benefiting heavily in the areas of job creation and import-export trade among others. However, China remains the major beneficiary, eliciting fear from the US of being overridden. Fortunately, the two continue to enjoy their partnerships regardless of the imbalances.

Cooperate with us and forget your worries!
We will help you get high grades!

Order now
Macroeconomics: Switzerland The Study of Transnational Corporations Negative and Positive Effects
Get your price