Bubonic plague is one of the most deadly diseases in human history. It is a bacterial infection spread by Yersinia Pestis (Echenberg, 2012). According to historical records, the plague is mentioned as the cause of the Black Death. Notably, it was a plague that appeared in Europe, Asia, and Africa during the 14th century. The Word Health Organization indicates that the number of casualties related to the plague was approximately 50 million people. Those figures represented nearly 25% to 60% of the population in Europe (Cohn, 2013). It depends on the causative agent of Bubonic plague – a bacterial infection known as Yersinia Pestis (Echenberg, 2012). Bubonic plague can be transmitted through a bite from an infected flea and affects the lymphatic system.

The clinical manifestations of Bubonic plague that result from three to seven days of the bacterial exposure resemble flu symptoms, such as headaches, fever, and vomiting (Echenberg, 2012). Painful and swollen lymph nodes also occur in the specific area near the place where the bacteria gains an access to the skin. Other manifestations include high temperature which can reach  39 °C, muscle cramps, chills, and seizures (Echenberg, 2012).

There are rare cases when the disease transmission can occur through the exposure to infected tissues of a patient. Notably, it is the rat flea that causes the plague. It is a parasite that both field and house rats can carry. In fact, it has a tendency of seeking other hosts once the rodent host dies (Echenberg, 2012). The bacteria remain harmless inside the flea. It means that the flea makes the new host spread among other individuals. Later, the bacterial form develops in the infected fleas’ guts resulting in regurgitation of the ingested blood of the flea into the human host’s bite location.

The bacteria spread rapidly into the lymph nodes once it appears at the bite location (Echenberg, 2012). Additional bacteria then grow leading to typical syndromes of the disease. The progression of the disease can cause the lymph nodes to undergo hemorrhage and swell extensively. After, they more to the lungs and cause pneumonic plague (Echenberg, 2012).

There are various antibiotic types that have been effective in the treatment of bubonic plague. They consist of aminoglycosides, such as gentamicin, streptomycin, tetracycline, and flouroquinolone ciprofloxacin. These antibiotics help to treat the disease. It is crucial that these antibiotics are taken within twenty-four hours of potential infection of an individual in order to prevent death case. The other treatment options include intravenous fluids, oxygen, and respiratory support (Bentzer et al., 2016). Individuals that establish contact with infected persons must receive prophylactic antibiotics immediately to avoid severity or development of the disease. Late treatment increases the mortality rates. If the infected person does not receive the treatment in ten days, he or she will not probably survive. As a result, it is necessary for the victims to seek immediate treatment to increase survival chances.

When an individual stops taking treatment, there is a possibility of resistance which always increases significantly the mortality rates.

Description of the Scenario

In 1349, Bubonic plague was a bacterial infection caused by Yersinia Pestis. Its aftermath was devastating because many people were affected by the disease. During that time, no one knew what causes the disease or how to treat it. It appeared in the form of swelling in the groin area, neck or face. The illness can be transmitted by flying insects. As a doctor, I travelled to Paris, France. Then, I did not know much about the disease. In other words, I did not understand how I could care for someone who had bubonic plague. The disease killed nearly 7,000 people a year according to pnas.gov. Consequently, I decided to examine the lifespan of the plague which infected the victims before deciding to investigate possible intervention measures. It was important to determine how it took before a victim died of the plague because detailed knowledge would help in forming an intervention to either prolong the lives of the victims or find a permanent cure to the plague. I also wanted to examine the effects of any treatment options applied upon the victims which helped to maintain their lives before finding an accurate cure for the problem.

I assume that it takes minimum ten days for the plague to kill the victims. Additionally, I think that the application of intravenous fluids helps to prolong the lives of the victims for a week in addition to the minimum period.

In order to identify the type of disease which causes death, I used an observational method to examine the patients suffering from the disease. I took notes to discover any similarities with other diseases of the time, for example, with typhoid fever. In my analysis, I realized that the patients exhibited similar to typhoid fever symptoms. It means that the patients showed the signs of high fever and nausea. Thus, it was important to define a treatment method that would eradicate the symptoms of the disease. It was decided that the patient should have received enough water in order to reduce the water loss through vomiting. It was also important to press the chests of the patients while dealing with respiratory problems and help them breathe continuously.

I also noted that the patients had wounds on the bodies. Consequently, I decided to isolate the patients from the rest of the population. Additionally, I also understood that it would be better if I started wearing protective clothing. In fact, I would eliminate any possible transmissions to me. I provided the patients with water constantly in order to avoid dehydration. Moreover, I used vinegar to clean wounds that might have swollen to the size of apples. Moreover, I lanced the buboes to heal wounds. However, the heavy bleeding caused patients to die. In those cases, I tried to estimate the length of patients’ dying. I was able to sample fifty patients in isolation. In fact, I chose ten of them to administer treatment options to eliminate fever, to reduce bleeding through lancing, and to provide water to prevent dehydration. However, I decided to leave other forty patients without treatment interventions.

Ten of the patients that experience common symptoms and underwent treatment died in thirty days. The remaining forty patients that were not treated died within ten days.

The following table shows the period of the disease in the cases when different treatment measures were administered and in the scenario where no treatment option was explored. 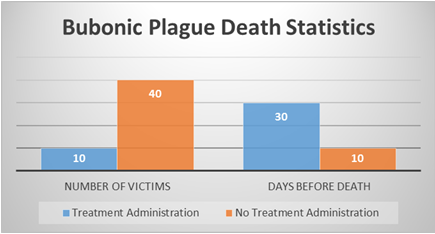 Bubonic plague is a serious bacterial disease that can cause massive deaths within a short time. Moreover, the lack of immediate treatment administration can cause the death of a victim in less than ten days. Thus, it is clear that preventive measures are required to reduce the risks of infection. It is important for people to live in a clean environment that is free from rodents and fleas. Undoubtedly, such poor conditions may increase the risks of infection. Additionally, it is important to avoid contact with any carcass of the dead animals. Such simple measures will reduce infection rates.

Therapeutic Interventions for Anger APN Leader Interview
Get your price